We Hope You’ll Join Us New Year’s Eve On WGN!

Posted on December 29, 2016 by steveandjohnnie

22 years ago we rang in the New Year on the air with you on WGN Radio from the Showcase Studio for the very first time.  Well, buckle up because, this Saturday night/Sunday morning from 10 PM – 2 AM, the old year will exit and the new year will start with Steve & Johnnie’s “Cheap Date Life After Dark New Year’s Eve Extravaganza” on WGN Radio!!

We’ll kick off this live 22nd anniversary broadcast with in-studio performances from several guests including Josh Solomon and Erika Brett from The Empty Pockets plus one of the featured artists on the PBS Soundstage Special “Cornerstones Of Rock,”  the man who sang lead on many of The New Colony Six’s hit records, Ronnie Rice, as well as, fresh from her “Legends” tour, the multi-talented Lisa McClowry along with The Musical Mentalist, Sidney Friedman, who will have some predictions for the new year.

At Midnight, we’ll have the Chicago countdown live with thousands from right outside our studio on Michigan Ave. 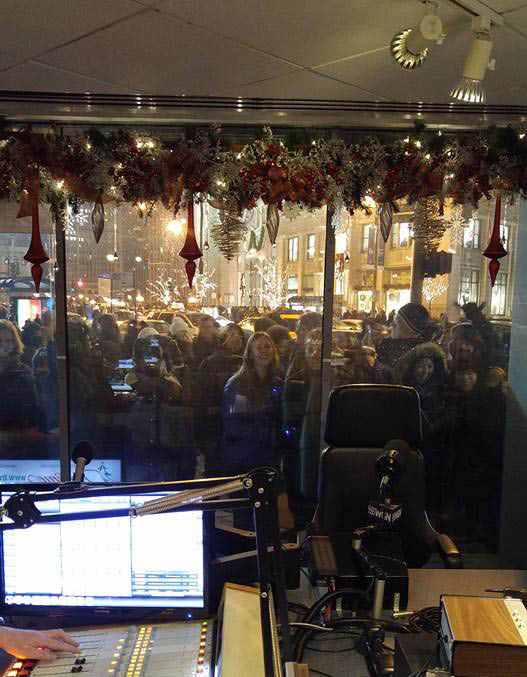 Our view, last New Year’s Eve, from the Showcase Studio

Throughout the show we’ll be checking in with some old friends.  For example, there is this guy named Spike who just might be familiar to you and then there is our friend Chuck Mead from BR549 and “The Million Dollar Quartet.”  And, of course, we’ll have a lot more “drop-in” surprises, but if we told you everything you wouldn’t be surprised.

And all this is just the tip of the iceberg!

So, keep watching this space for more updates on as much fun as we can fit in.

Don’t forget, if you’re not in the Chicago area, you can listen and WATCH the show.  Just click on this link to WGN Radio’s live stream.

4 Responses to We Hope You’ll Join Us New Year’s Eve On WGN!