Posted on March 8, 2020 by steveandjohnnie

Like many of us who lived in the Chicago area, I (Steve) first knew him as “Mother Weber’s Oldest.”  It was a nickname Clark Weber used from the very first time I heard him on WLS.

That first time, by the way, was not in his high-profile morning slot but, rather, what may have been his very first NIGHT on WLS.  It was a night in the early 60s and, as has been the case with much of my life, I was up after Midnight.  I heard this new voice on the radio and stayed with the show long enough to know I liked what I heard.  I believe that, at some point in the show, Clark made a reference to having just segued to WLS from a station in Milwaukee.

Clark, of course, went on to a very successful run as WLS’s morning man and program director.  It was during that period, back before large corporate ownership and consultants determined a station’s playlist, that Clark played a significant role in helping to give exposure to many of Chicago’s talented groups who went on to national fame.  Speaking of talented groups, Clark was also on stage doing the introductions when I saw The Beatles at Comiskey Park, in 1965.

It was during his successful run as a talk show host at WIND that I met Clark.  He was doing the evening slot and I was doing overnights.  I have to admit that, although, at that point, my resume also included spending several years at WLS, I was more than a little “star-struck” at meeting one of my long-time radio heroes.  Clark’s personality and wonderful sense of humor put me at ease and we quickly developed a genuine friendship that lasted throughout the years.

Clark’s many accomplishments have been and will be recounted in many forums but, for the purpose of this post, I’d like to focus on a rather personal, life-changing, event or two.

While working at WIND I was living in Bolingbrook, a southwestern suburb of Chicago.  On my ride to and from the city I would scan various radio stations.  As I was scanning I noticed that the same voice I heard doing talk on an AM station was the voice I heard doing a music show on an FM station.  It was a very talented female named Johnnie Putman.

One night while getting ready to head in to WIND, I was listening to Clark and heard a female voice calling in to comment about his current topic.  It was Johnnie.  When I got to the station, I mentioned the call to Clark.  I told him that I recognized the caller as the versatile suburban radio personality I’d been listening to.  He remembered the call and said he’d been impressed by her.   It just so happened that, at that time, there was an on-air opening at WIND.  Clark and I went to WIND’s Program Director, Susan Eggleton, and suggested she might want to take a look/listen to Johnnie.

I’ll let Johnnie jump in and pick it up from there.

In the late 70’s I (Johnnie) was a baby talk show host in Aurora when Clark would hear me while flying his plane in and out of the Aurora Airport.  One evening on WIND, Clark’s topic was “Getting The Job Of Your Dreams” and his in-studio guest was an actor I’d done an independent film with.  I called in to say hi and Clark turned the tables and started interviewing me.  Steve (who I had not yet met but, who had heard me from his home in Bolingbrook) happened to be listening as he was driving in to the station, recognized my voice and mentioned the call to Clark.

The planets were in alignment and, indeed, there was an opening at WIND Radio and Clark and Steve recommended me to the PD.  I was hired by phone based on their recommendation.  No tape, no audition!

When I got to WIND to train Clark invited me to spend Friday nights with him on the air in “The Boom Boom Room”.  By having me on Friday nights he was telling the audience to give the girl a chance.

A few years later my family heard I was getting married when Clark announced my engagement to Steve on the air.  We newlyweds spent lovely evenings with him and Joan enjoying Clark’s homemade peach ice cream.

Clark was a walking history of rock radio and a pioneer in the art of hosting talk shows.
I’m sorry we hadn’t talked in a awhile but, happy that when his book came out he spent a few late night hours in the WGN studios with us talking about his amazing life. 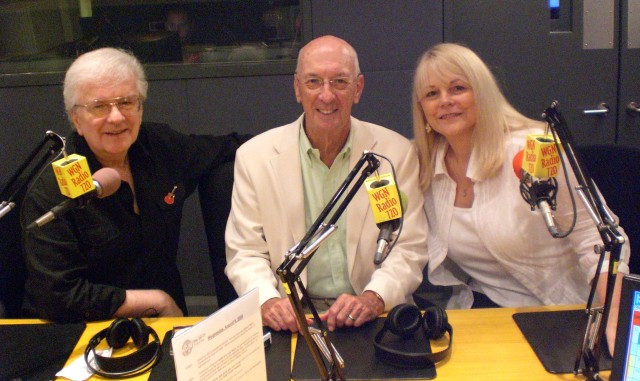 Clark will always be remembered for helping to put our lives on the wonderful trajectory it has taken.  We’re so glad we got to thank him.