Posted on July 6, 2020 by steveandjohnnie

Charlie Daniels has been a part of the soundtrack of our lives for a long time.  In the days of our solo radio careers, Charlie’s records were regularly a part of our respective radio lives.

In fact, before radio was even thought to be a career option, one of the highlights of Johnnie’s college days was when she was on the stage crew for Charlie’s first performance at UT Martin.  Charlie’s performance of his song “The South’s Gonna Do It” brought down the house and remains one of Johnnie’s favorite live concert experiences ever!

Charlie Daniels’s career is the stuff of legends.  From having one of his first songs, “It Hurts Me,” recorded by Elvis Presley and recording 3 albums with Bob Dylan to his own recording success with hits such as “Uneasy Rider,” “The South’s Gonna Do It,” “The Devil Went Down To Georgia” and many others, this Gold, Platinum and Multi-Platinum Grammy, CMA and ACM winning “Long Haired Country Boy” member of the Grand Ole Opry charted his own highly-celebrated path in music history.

We’re not sure exactly when we talked with Charlie for the first time.  We do know we were at WGN radio and it was a phone interview coinciding with the release of one of his albums.  Unlike some “first times” with well known artists, this first interview with Charlie felt very relaxed.  It was as if we had reconnected with an old friend.  Happily, that first interview turned into a genuine friendship that found Charlie joining us on the air anytime a new album, appearance or anything else gave us an excuse.

One of our more memorable in-studio interviews with Charlie happened after one of his appearances in the Chicago area.  Charlie finished up his show and came right over to the Tribune Tower to join us on WGN.  During the interview we surprised him with a phone call from one of his idols.

A few years later, when he heard we were working on our book, “A Little More Les,” Charlie’s fingers quickly hit the computer to write about what happened that night.

Doing Steve and Johnnie’s radio show more closely resembled dropping by for a visit with friends than an interview stop.

The atmosphere was totally laid back, the conversation free flowing and unscripted and Johnnie was apt to have brought along some of her fabulous home made goodies to snack on and all in all it was a very enjoyable experience.

I didn’t realize until my second visit that Steve was a guitar player which opened up a whole new topic of conversation for the two of us, and as guitar players will we started discussing our favorite guitars and being the dyed in the wool Les Paul man I am, the conversation drifted around to the man himself and the amazing accomplishments he had made in music and electronics.

Right about then Steve pulled one on me that I would never forget and always remember as one of my favorite moments in radio. We took some phone calls and much to my amazement, I was speaking to Les Paul.

I must have come off as somewhat flabbergasted, but you have to realize that for me speaking to the great Les Paul was tantamount to an airplane pilot being able to speak to one of the Wright Brothers, this man had designed and developed the best electric guitar in the world, the one that I have played since I got to the point of affording one and here I was actually having a conversation with him.

And it didn’t end there, Les invited me to come by the Iridium Club in New York the next time I was in town and sit in with him.

You have to understand that there are thousands of guitar players around the world that would trade parts of their anatomy to stand on the same stage with the legendary Les Paul and I took him up on the invitation and spent a whole set jamming with him, an experience that goes into the top drawer of my musical memories. 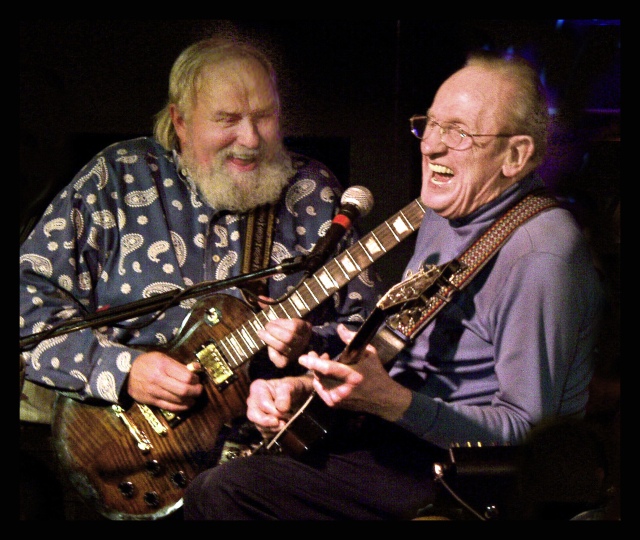 To say Steve and Johnnie are nice people is a total understatement and their making it possible for me to meet and jam with Les Paul will always be very special to me.

I love you folks,

As you can see in the photo, the looks on Charlie and Les’s faces are pure joy.  We were really happy to have played a part in bringing them together.

For many years, Charlie was a fixture on our New Year’s Eve shows.  It became part of his New Year’s celebration tradition and ours to start the new year with a call in from wherever he was performing.

Speaking of the holidays, we’ll never forget the year Charlie sent us a country ham for Christmas.  He sent it to us at WGN and when our morning man, Bob Collins, saw the ham we almost had to fight him for it.  Another favorite Charlie Daniels Christmas memory is the year that, in between his, already full, recording and touring schedules, Charlie somehow carved out enough time to do a special recording for us of a Christmas story that became one of our annual features on WGN radio.

We were stunned when we heard the news of Charlie’s passing.  But, as we write this, we’re comforted with the thought that Charlie is getting ready to rosin up his bow or grab his Les Paul guitar and take his place in one heck of a country-rock band.

We love you too, Charlie!