As many of you know, we’re working on our second book.  The working title is “Life After Dark.”  At this point, the game plan is for the book not to be just about us but, to largely focus on, our interactions with some of the interesting people and events that have been a part of our adventures in broadcasting.

We would be remiss, of course, if we didn’t spend a little time covering the individual journeys that brought us together inside your radio speakers and, occasionally, on your TV screens.  To that end, along with the writing and listening to our audio archives, we’ve been spending a significant amount of time going through photographs.  Neither of us realized just how many boxes of pre-digital photos we had.  Trust us, there are a lot!

Most of you know that we didn’t land on this planet at the same time.  We don’t think Krypton was involved in either of our arrivals, but we’re still going through stuff, so who knows.

Anyhow, point is, one of us has been around this galaxy longer than the other.  That point was underscored when we uncovered some photographs from 1975.  By that point HE was working at WLS radio, in Chicago, and took a vacation to join his Dad and see the Grand Canyon.

Sadly, we haven’t found photographs of the two of them, yet, because his Dad was taking most of the pictures, including this one of a very intense long-haired guy studying the chess board in their room. 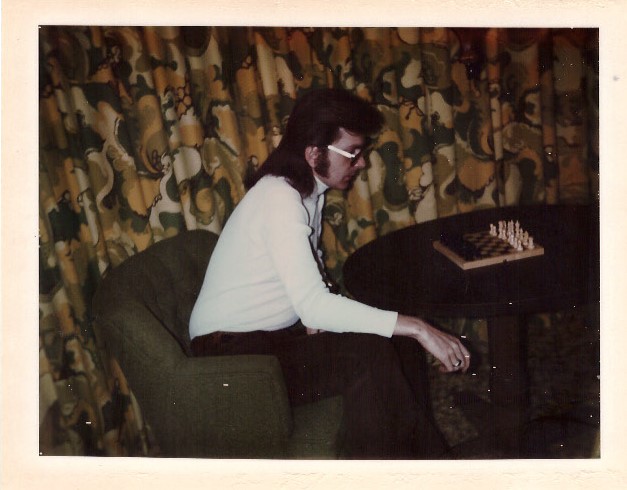 However most of the time was not spent in their room because this was in the days before the Grand Canyon became as over-populated with tourists as it is now and the two of them were able to spend a week just driving through this amazing natural wonder by themselves.

When the week was over HE strongly felt that the week in the Grand Canyon was possibly the best adventure he’d ever experienced.

Little did he know that his greatest adventure was yet to come.

That same year, 1975, SHE was working as a, not yet 21 year old, cocktail waitress at the Holiday Inn on Chicago’s Lake Shore Drive.

Spoiler alert: They got together and, happily, the adventure continues.